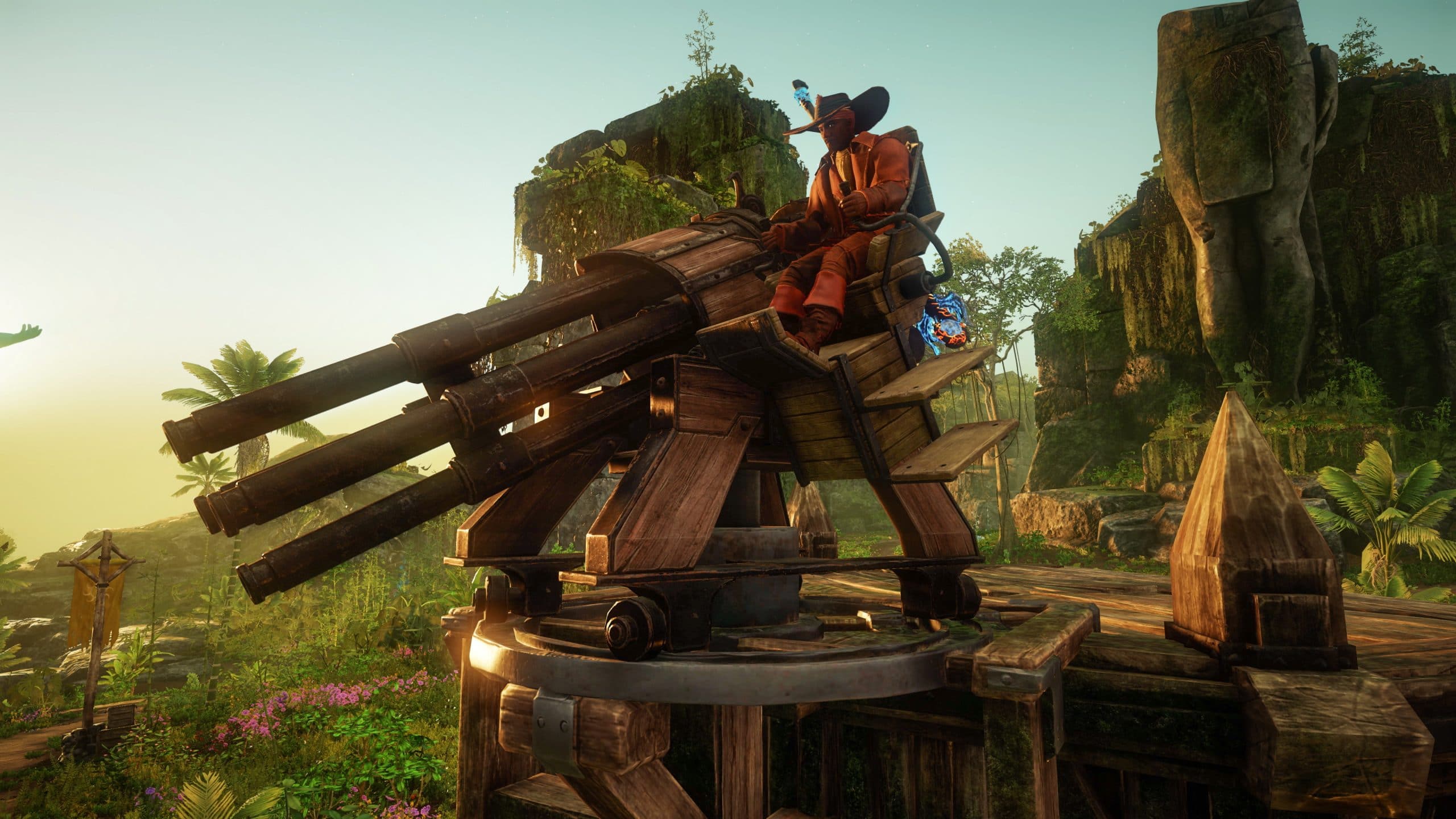 Outpost Rush is an instanced, 20v20, PvPvE Mode in New World. Each team must coordinate and balance their time defeating enemy players, capturing objectives, gathering resources, and building up their outposts. You must be level 60 in order to participate in Outpost Rush.

How to Play Outpost Rush

In order to queue up for Outpost Rush, you must first reach level 60. Queue up anywhere in the world by pressing ESC and choosing game modes, and selecting Outpost Rush. You can also queue up at any settlement, outpost, your Faction Vendor, or Outpost Rush NPC. You can queue solo or in a group of up to 5 players. As long as there are 32 players that join the queue you’ll be able to start. Once started you’ll be ported to the island of Nauthynos to start the battle.

Once you’re on the island, each team will start at its own fortress. Between the two forts lie the three outposts of Luna, Sol, and Astra. Each of the outposts can be captured by standing inside the capture point located in the center of the outpost. Your team will gain points for holding the outposts and killing enemy players.

Holding an outpost will grant 1 point every 3 seconds and killing a player is worth 1 point per kill. You will also drop resources on death that the enemy team can pick up if you have collected them. The first team to reach 1000 points wins the match.

Along with the Outpost Rush Cache, you will also receive 1 Ruby Gypsum for the first 2 Outpost Rush matches you play each day. See our Expertise Guide for more information.

It’s important to note that you must earn a minimum of 501 points in the match in order to receive the rewards. You will need to earn 3000 points for the Maximum rewards.

There are several objectives located around the map that will give your team an advantage and help you win the match.

Baroness Hain (The Frozen Ghost) is a powerful creature that spawns every 10 minutes. The team that deals the killing blow to the Baroness will be rewarded with a strong buff that increases their health regeneration and defense for the next 2.5 minutes. It will also freeze the enemy score, preventing them from gaining points from outposts or kills for 2.5 minutes. Winning the Baroness objective can quickly turn the tide of an Outpost Rush match.

The Corrupted Portal is guarded by corrupted creatures. Your team can make their way through the corrupted enemies and donate Azoth Essence to the portal. When a team deposits 750 Azoth Essence into the portal, it activates and a Brute Summoning Totem is granted to the player that made the final deposit that pushed the total to 750. You can then take the totem to one of the summoning stations at any of the outposts to summon the brute. You can not summon a brute (or any other creature) on a summoning circle that already has a creature summoned on it.

The player who obtained the summoning totem can make their way to a Summoning Circle to use the totem. The Summoning Circles are located in various key locations around the map and are stone platforms that allow any player who has acquired the totem to summon a monstrous ally who will defend that location from enemy players. Summoning totems are lootable upon player death.

As you explore the island of Nauthynos you’ll be able to gather resources to help your team win the match. These resources are used to reinforce your outposts, so they are an integral part of winning an Outpost Rush match. There are 4 resources that your team will want to gather (See above for the locations)

Once an outpost has been captured a team can gather the resources above to build and upgrade various structures. All of the structures can be destroyed by the enemy so it’s important to keep them well repaired.

At each Outpost, there are structures in place by default that can be utilized by the controlling team.

The Nauthynos Island lies off the coast along the remote and inaccessible northwestern shoreline of Aeternum. The Island was formed by a massive eruption of Azoth from underneath the bedrock of the ancient sea.

Over the millennia, the eruption deposited rich resources from the seabed across the island and created an isolated tropical paradise. Not only that, but the source of the eruption, an Azoth leyline permeated the ground of the island causing natural flowing geysers of pure Azoth. Over the years these geysers have subsided, but the legacy remains – pure Azoth often surges to the surface and can be found infused in many of the long-term flora and fauna of the island.

To capture this Azoth, the Ancients built a cluster of Ziggurats and ancient machines designed to collect the sacred substance which was then channeled into a series of storage facilities hidden amid the jungle and cliff walls of the island. To protect their vast stores of Azoth, the Ancients installed defensive fortifications and mystical traps which can twist the very laws of nature. As dangerous as the island may be, both the resources and technologies it contains would be of unparalleled strategic value to any who could maintain control of them.

Over the years, some have sought to settle in this region to take advantage of its resources long-term, but occasionally, unpredictably, the island is inexplicably flooded by a surge of water from the surrounding sea. The Ancient structures are built in such a way as to withstand the floods, but long-term human fortifications are not, hence any man-made structures currently on the island are temporary, at best. Amidst the ruins of the island stalk many dangers, the Angry Earth, the Corrupted, and natural beasts have grown larger and more feral, as well as those who had come to rule and conquer but now walk the land as vengeful spirits. Into this landscape, a new generation has come; seeking treasure, knowledge of the unknown, and the power of Azoth.