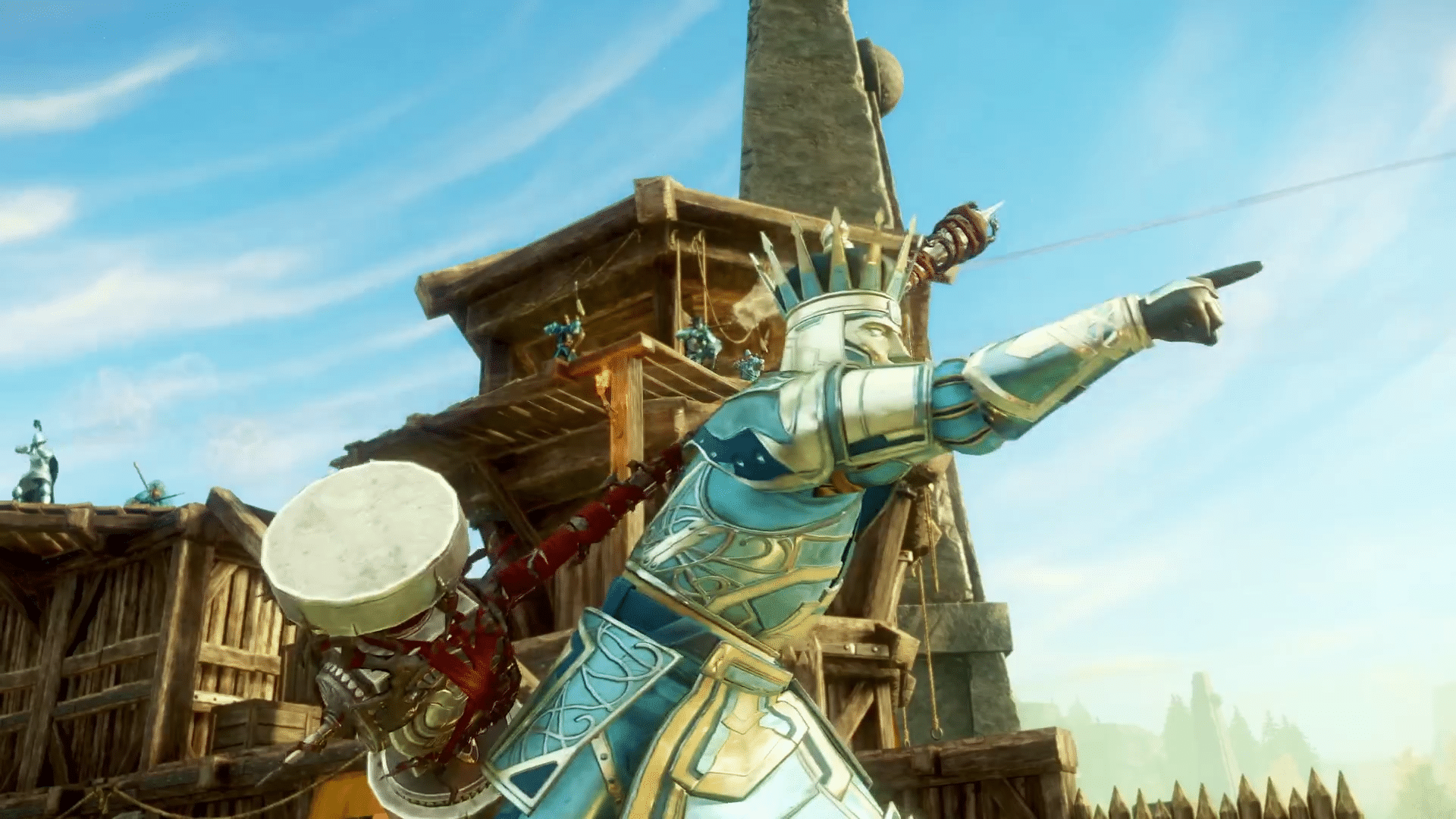 In our New World War Hammer Guide, we will walk you through the War Hammer Mastery Trees, Recommended Roles, and More!

The War Hammer is a 2-handed weapon in New World that scales solely from strength. It excels at crowd control, and although the swings are slow it can dish out decent amounts of damage. It also has an ability that is taunt gem compatible making this a viable weapon to use for tanking in New World.

In this guide, we will go over the war hammer’s mastery trees, recommended abilities for different scenarios, and tips to optimize the use of the war hammer.

For a complete list of changes for the War Hammer, you can check out our War Hammer change log.

The Juggernaut tree focuses on armor penetration and hard-hitting abilities. The three active abilities in this tree consist of Armor Breaker, Mighty Gavel, and Wrecking ball.

Armor Breaker is a hard-hitting melee attack that penetrates a portion of your target’s armor and deals an increased amount of weapon damage. As you progress through the upgrades to this ability you will be able to add grit to the ability, making the attack unstoppable. The 3rd upgrade to Armor Breaker adds rend. Finally, when fully upgraded, you will gain increased damage against targets with full health making this ability a very strong opener.

The staple ability in the Juggernaut tree is Mighty Gavel. When activated you will leap into the air and crush down on your target dealing a large amount of damage. The first upgrade to the ability is an execute component. You will deal increased damage to targets under 30% health. As you progress further into this ability you gain increased stamina damage to your target, and will gain haste that will increase your movement speed for a short duration.

The juggernaut tree does not have a key passive. Instead, its an additional upgrade to Mighty Gavel once the ability is fully upgraded. If fully upgraded you will also gain a second attack that deals 220% weapon damage. Making this a potent damaging ability. It’s important to note that this upgrade works just as any other key passive, you will still have to have 10 abilities in the tree unlocked prior to unlocking the final upgrade to Mighty Gavel.

The third ability in the Juggernaut tree is Wrecking Ball. This ability strikes the ground around your target and deals increased weapon damage. Although this ability does not do quite as much damage as the other 2 in the tree you will also gain fortify as a second upgrade to Wrecking Ball. Fortify will increase your damage resistance for a short duration. The final upgrade will allow you to knock down enemies within 1.5 meters of the target.

The remaining passives in the Juggernaut tree focus on additional armor penetration, reducing cooldowns, and increasing overall damage output by adding things such as grit to your war hammer heavy attacks.

The Crowd Crusher tree is heavily focused around crowd control. The three active abilities in this tree are Shock Wave, Clear Out, and Path of Destiny and the key passive is Aftershock.

The Shockwave ability is taunt gem compatible, making this a useful ability when tanking. Upon activating Shockwave you will slam your hammer into the ground and cause a 3-meter radius AOE earthquake. It will deal some damage, but more importantly, will apply a short stun to all the targets impacted. The 2nd upgrade to the ability will also cause it to apply “weaken” to the targets affected by the ability. Weaken will decrease the damage dealt by the target’s attacks for a short duration. The Final Shockwave Upgrade will increase its effective radius.

The taunt gem, along with the AOE stun and “weaken” status effect make this a solid choice to slot as a tank ability.

Clear Out is an ability that swings wide and will knock back enemies in the path of the swing. It also deals slightly increased weapon damage. Upgrading this ability will grant fortify which will increase your defense for 4 seconds for all friendlies within 6 meters of you. Upon further upgrading, you will also receive a reduced cooldown for Clear out, and will be granted haste which will increase your movement speed for a short duration.

The third ability in the Crowd Crusher tree is Path of Destiny. Upon activating the ability you will create a linear wave of energy in front of yourself that will deal a small amount of increased weapon damage to all targets in the path of the wave. This is a straight line in front of your character, not a radius AOE ability. Once upgraded Path of Destiny will also stagger all the targets in its path.

The key passive in the Crowd Crusher tree is called Aftershock, and synergizes well with the other abilities in the tree. If you take Aftershock your targets will also be slowed every time they are affected by another Crowd Control ability.

The remaining passives in the tree are centered around increasing mitigations, reducing debuffs on yourself, and reducing ability cooldowns.

The War Hammer excels at Crowd control and can be used in Tank and DPS builds. For Tanking, the War Hammer pairs well with the Sword and Shield, creating Top TIer CC with ways to maintain Threat on both Weapon Ability bars. For DPS in a PVE setting, the war hammer is used to Rend Targets and set up Damage spikes with Shockwave and Wrecking Ball.

In PVP, the War Hammer is most commonly used with the Great Axe and Blunderbuss. In both builds, the War Hammer’s CC is used to control your enemies, setting them up for damage spikes.

The Warhammer is most commonly paired with the following weapons:

How to Level the War Hammer in New World

The Warhammer has good AOE damage and Great CC. This will allow you to group mobs together and quickly kill them for faster weapon experience. Here is the order in which you should spend your mastery points as you level.

For pulls, group up your enemies and start your combo. Here is the order of abilities and attacks once unlocked.

The Ability perks for the War Hammer in New World are as follows:

The type of gem you will want to slot into your War Hammer is heavily dependent upon your build and what you’re trying to accomplish. If you are running as a Tank you might prefer a Carnelian gem for taunting. If you are going DPS-PvP you might want Malachite to do more damage against targets with Crowd Control status effects. If you are going DPS-PvE you will likely pick the Opal for the highest uptime.  (You can check our quick reference guide for gems for a full list of gems and their effects).

Enemy types the War Hammer is strong/weak against

With a War Hammer, the damage type you will be dealing is Strike. Our Damage Type vs Mob Types Quick Chart guide as a complete breakdown for every weapon. Ancients will be the monsters most affected by this and is ideal to use it against them. The Lost also take extra damage from Strike.

That Concludes our New World War Hammer Guide. For more on where to level your War Hammer, check out our Weapon Leveling Locations.