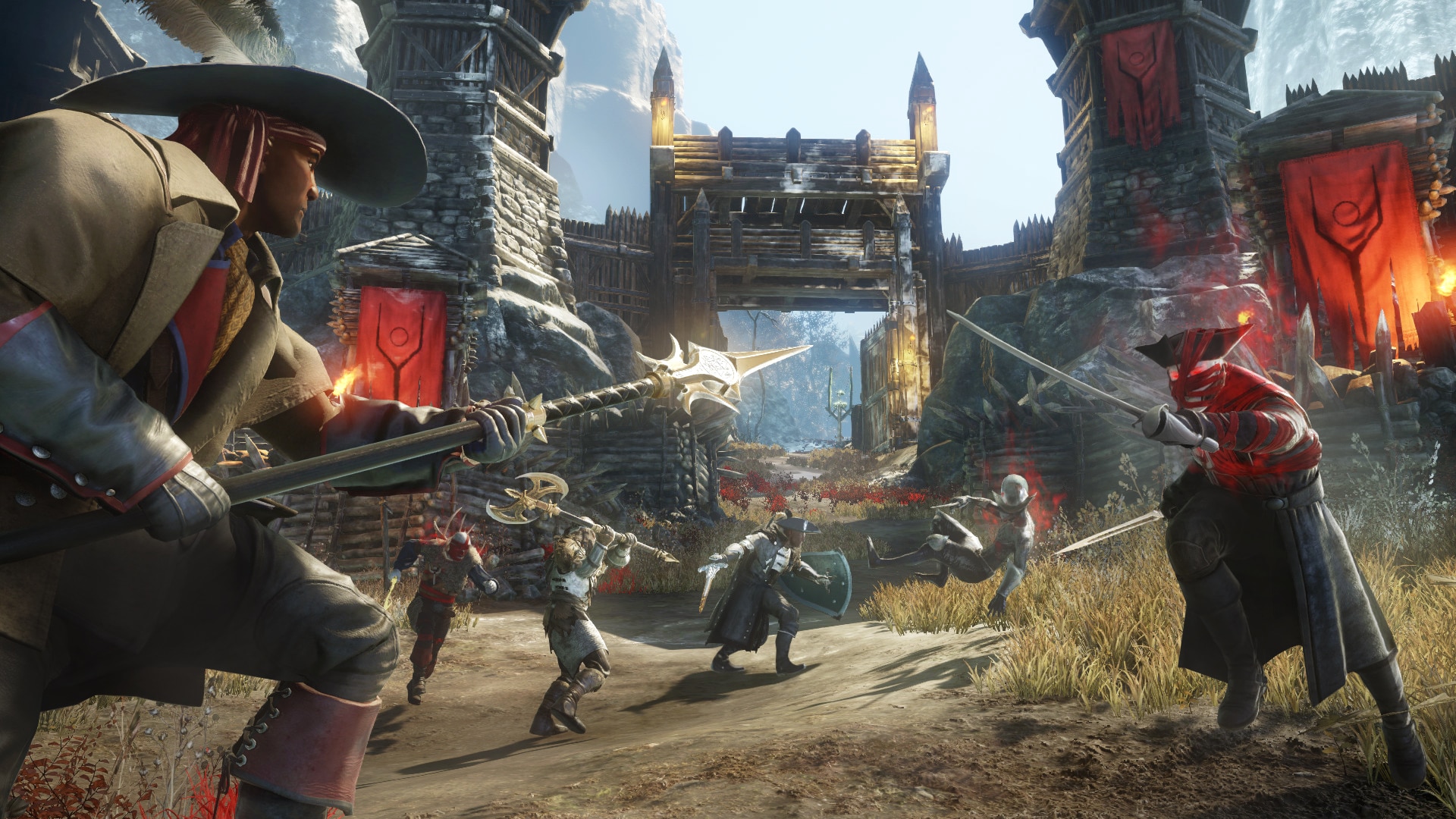 There are 3 New World factions players can choose from. The Marauders, The Covenant, and the Syndicate.

The Marauders are a ruthless military force bent on establishing a free nation. One where anyone with the strength to do so can prosper and profit.

The Covenant is a fervent group of individuals that has charged itself with cleansing the land of heretics and defilers. They do this so that its true holy nature can flourish and justice can be restored.

The Syndicate is a secretive organization of immeasurable cunning and intellect in search of forbidden knowledge. Their plan is to usher in a new age of enlightenment.

How to Join a Faction in New World

Once you complete the first few quests you will then be directed to the closest town. You will need to continue to progress through the quest line. This will eventually you to meet the leaders of each faction. Once you have met each one you will then be faced with a choice of which faction to join.

Each Faction has an Enclave located in the Everfall. These will act as the “quest hub” for your faction as you travel through the main quest line. Below is a quick preview of each Enclave.

How to Switch Factions

To change factions, you simply need to press the default key of “K” and go to the Bio tab. In the bottom left-hand corner, there is a Change Faction button. If you are in a company you must first leave the company before you can join a different faction. You can change your faction once every 60 days. Upon changing factions you will auto-complete the faction advancement quests, so you will not have to regain faction reputation again. Additionally, any faction gear that you have purchased from your old faction will be yours to keep.

Anyone from any faction can opt-in to PvP while in the open world. Once you have joined a faction, you can flag up for PvP in any settlement, outpost, or spirit shine. You can flag by pressing the default key of U. There is a cooldown period once you leave the safe zone before your PvP Flag becomes enabled. You can learn more about open-world PvP in our open-world PvP guide.

In order to control territory, you must win a war. Before you can actually declare war on another faction, that faction’s control of its territory must first be undermined.

Upon accepting a PvP mission, you will be tasked with completing a specific quest.

These include recovering tactical information, patrolling a specific area, and more. It’s very important to note that upon accepting a PvP mission you will be auto-flagged for PvP. If you unflag, you will automatically fail that mission. If you die at any time during the mission you will also fail the mission. You will keep the mission but will have to start the mission over from square one.

Upon successful completion of a PvP mission, you will gain faction currency and influence for your faction within that territory. This will reduce the control of the faction owning that territory bringing it closer to being vulnerable to war declaration. You will also receive experience towards your PvP reward track and receive PvP salt currency that can be used to purchase items from your PvP reward track.

You can also do PvE missions for your faction which include things like crafting supplies, defeating mobs, and gathering resources. When you complete a PvE mission you are rewarded with faction currency but will NOT gain territory influence.

Once a territory is undermined to the extent of becoming vulnerable to war declaration then any company in the undermining faction can then declare war on the territory. Once this is done, one of the companies that have declared war will then be selected to be the Vanguard.

It is the responsibility of the leaders of the selected company to be the Vanguard to build out their forces with players who volunteer to fight, and the vanguard will be the company that controls the territory if the war is won.

How to Increase Faction Rank in New World

These quests will automatically appear in your quest log under the “side quest” category, once you reach the necessary reputation to unlock the next milestone. From the quest log, you can view the quest information and the area in which you need to go in order to complete the trial quest.

It’s important to rank up within your faction so you can increase the cap of faction tokens that you can have and unlock the higher-tier faction gear that’s available to you within the faction store. The faction rank milestones are as follows (These are the Syndicate names, the names will vary per faction but the ranks will not):

Each faction representative will allow you to spend your faction tokens and gold to purchase faction-specific items. There are also valuable resources available from the faction vendors, such as Chunk of Consecrated iron that’s used to apply the Resilient perk to your items when crafting. The faction vendor is also the only place you can obtain Runes of holding which you need to increase your storage space when crafting storage-related items.

It’s also important to note that all the faction gear comes equipped with set attributes. However, you change your desired attributes by purchasing a faction seal from the faction vendor. The seals only cost faction tokens and are cheap to buy. They are located in the first tier of the store. You must not have the piece of gear equipped, and you can only change your attributes once per piece of gear, so make sure you don’t apply the wrong seal to the wrong item.

Do I Have to Join a Faction in New World?

If you’re having a tough time trying to decide which faction to join you can always take the Faction Quiz. The Faction quiz was released before New World launch to help you determine which Faction to fight for.

That concludes our New World Faction Guide. For more on territory control and faction warfare, check out our New World War Guide!