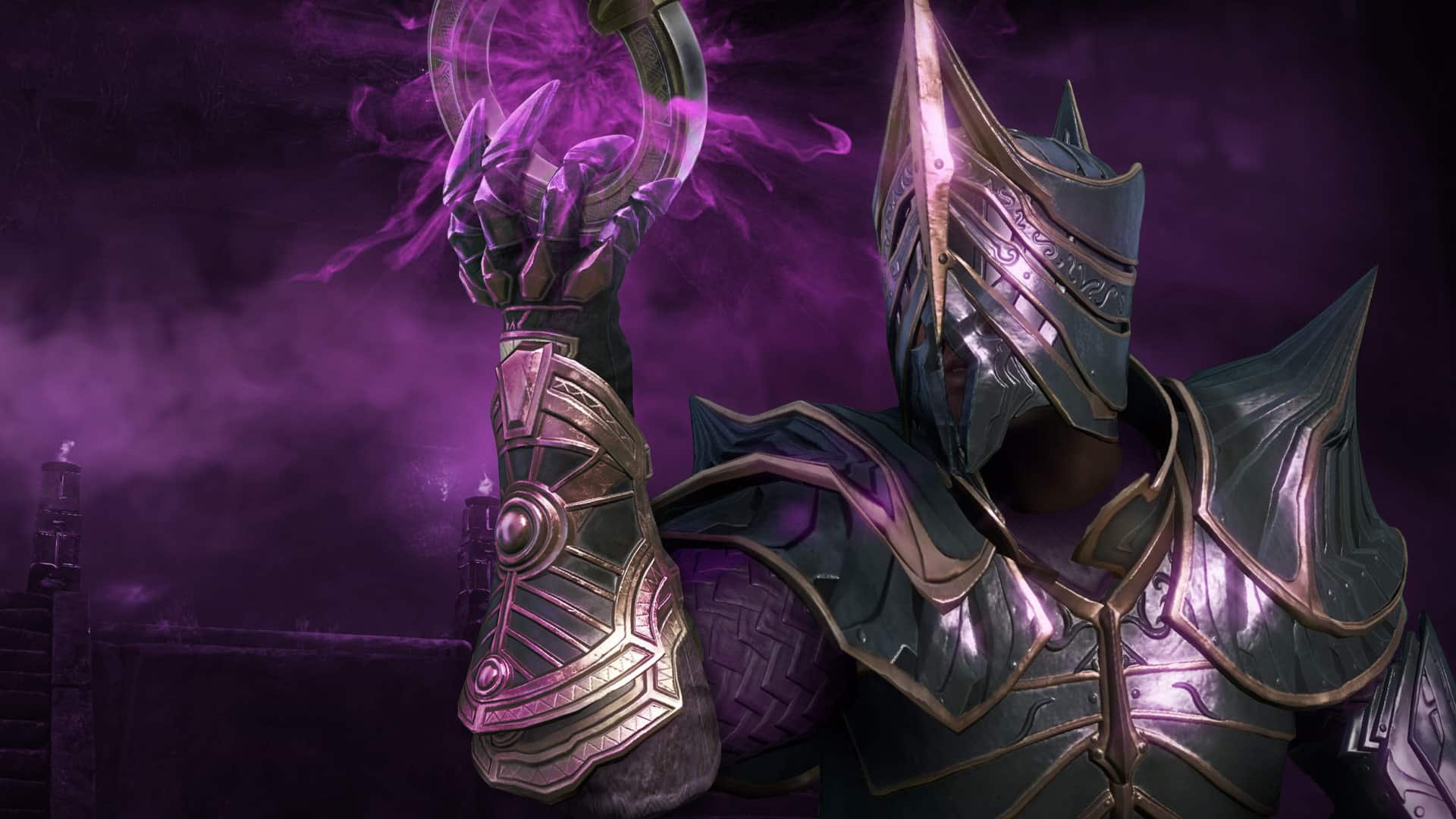 The Void Gauntlet is a magic weapon that deals Void damage and is scaled off Intelligence primary and Focus secondary. It specializes in dealing damage over time, close-range buffs or debuffs, and healing depending on your build.

The Void Gauntlet in New World uses mana when using both light and heavy attacks, and abilities. Light attacks cost 2 mana and Heavy attacks cost 5 mana. Mana does not regenerate while you are attacking, but there are ways to manage your mana, and there are mana potions that can be consumed to recover mana quickly.

The two skill trees for the Void Gauntlet are Annihilation and Decay.

The Annihilation tree is centered around getting up close and doing crit damage similar to your standard melee counterparts.

Petrifying Scream is the first ability in this tree, dealing 100% weapon damage and inflicting root on enemies within 5m in front of you. This gets upgraded to gain fortify for each enemy hit stacking up to 3 times and increasing the root duration to 3s if the targets are below 50% health.

Our next ability in the tree is Void Blade which summons a blade of void energy to do light and heavy melee damage. Light attacks do a slash dealing 90% weapon damage and heavy are a thrust attack dealing 140 % weapon damage, both attacks inflict Disintegrate on successful hits dealing 5% weapon damage per second and reducing damage absorption by 5% stacking up to 3 times. Upgrading this skill gives you fortify for 5s upon activating the skill, +10% critical damage on Void Blade attacks, and successful thrust attacks will heal the player for 5% weapon damage per Disintegrate stack on the target. This healing is scaled exclusively off focus.

The last ability in this tree is Oblivion. Oblivion summons a circular rift of void energy at the player’s feet that deals 30% weapon damage per second. It also grants Empower to self and friendlies increasing damage by 15%. This has a 5m radius and a 6s duration to start. Upgrading this will also give +15 Stamina per second for the player and allies inside the radius as well as inflicting Weaken on enemies inside the radius reducing their damage by 5% for 5s per hit with a max stack of 3.

The Decay skill tree and its passives are centered around basic healing and buffing allies.

Baleful Tether fires a projectile that tethers you to an enemy, weakening it and empowering you by 4% per second. The tether ends if the target moves beyond 15m and the duration is 10s. Upgrades apply 100% mana regen while the tether is active and 80% of weapon damage as health if the tethered target dies, scaling exclusively off focus. You will also have reduced cooldowns of other Void Gauntlet abilities by 5% for successful hits against a tethered target.

Next up is the Orb of Decay which fires an unblockable orb that passes through enemies dealing 100% weapon damage and inflicting Disintegrate. This deals 5% weapon damage per second and reduces damage absorption by 5% for 8s stacking up to 3 times. At max range, it transforms into a healing orb and returns, healing friendlies for 20% weapon damage per second for 5s. As before the healing scales exclusively with focus. You can upgrade this to gain 5% mana per enemy hit by the orb and slow enemies already afflicted by any debuff, reducing their movement speed by 30% for 3s.

The final upgrade will allow you to press the ability again to detonate the orb with a 4m explosion radius. Depending on the orb’s phase the explosion will either damage enemies for 100% weapon damage and apply a stack of Disintegrate or heal friendlies for 70% weapon damage scaling exclusively off focus.

The final ability in this tree is Essence Rupture firing a projectile that inflicts Essence Rupture for 10s healing anyone that hits the target for 20% of the damage done. This does not apply to damage over time. Upgrades add 80% healing of your weapon damage when rupture ends to allies within 4m of the afflicted target and players receive 15 stamina when hitting the afflicted target.

The key passive in this tree is Glimpse of the Void this passive will grant a stack of Void Essence per successful ability hit. At 4 or more stacks your next successful ranged heavy attack will instantly reset all Void Gauntlet cooldowns and remove all stacks. This can happen once every 15s.

You can reference our builds section for specific Void Gauntlet pairings and builds that other players in the community are using.

How to Level the Void Gauntlet in New World

You will want to follow the Annihilation Mastery Tree for leveling. The following Skill order is recommended as you level the Void Blade.

The Ability perks for the Void Gauntlet in New World are as follows:

The type of gem you will want to slot into your Void Gauntlet is heavily dependent upon your build and what you’re trying to accomplish. If you are pairing this with a Life Staff you would likely want to go with the Amber gem to get the extra damage from Focus. (You can check our quick reference guide for gems for a full list of gems and their effects).

Enemy types the Void Gauntlet is strong/weak against

With a Void Gauntlet, the damage type you will be dealing is Void! Our Damage Type vs Mob Types Quick Chart guide as a complete breakdown for every weapon. Ancients will be the monsters most affected by this and are ideal to use against them.

That Concludes our New World Void Gauntlet Guide. For more on where to level your Void Gauntlet, check out our Weapon Leveling Locations.