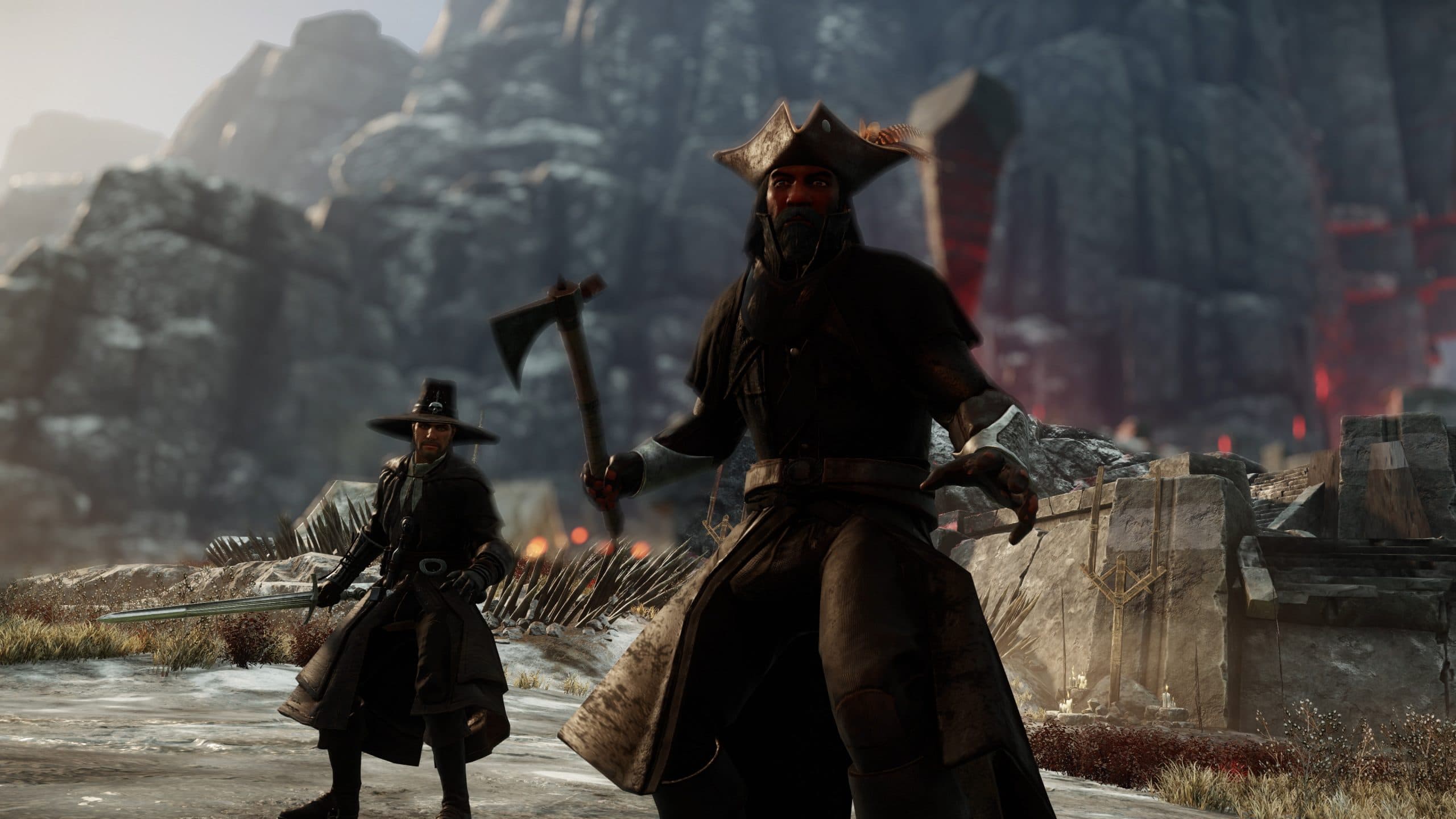 The Hatchet is a 1-handed weapon in New World that scales primarily from strength and secondarily from dexterity. It allows for very quick close-quarters attacks making it an excellent option for an aggressive melee playstyle. You can also throw the axe to gain a tactical mid-range advantage over your opponent in both PvP and PvE. For more information, continue reading our New World Hatchet Guide.

General information for the Hatchet in New World

The Hatchet mastery trees consist of the Berserker tree and the Throwing Tree.

The berserker tree focuses on a fast-paced melee playstyle. The 3 active abilities in this tree consist of Feral Rush, Berserk, and Raging Torrent. The Key passive is Defy Death.

Feral Rush is a sprinting melee attack that allows you to leap forward a short distance and hit your target twice. The first hit deals 115% of your weapon damage and if you land the second hit you’ll do 130% of your weapon damage, making this ability a hard-hitting ability. As you progress through the Feral Rush skill you’ll have the option to take the abilities dispatch and crippling strikes. These abilities will add execute damage which will deal 20% more damage to targets below 30% health, enhancing the damage even more,  and if you hit your target in the back you will root the target immobilizing it for 2 seconds.

Berserk is the staple ability of the hatchet. When you use this ability it will trigger berserk mode for 12 seconds. All Damage increases by 20% while berzerk is active. VERY IMPORTANT: If you swap weapons after initiating berserk mode then berserk mode will end. It does not carry over to your other weapon.

Berserk is also taunt gem compatible, meaning that you can equip a carnelian gem into the hatchet’s gem slot and when you use the berserk ability it will taunt all enemies within an 8m range.

As you progress deeper into the berserk ability you’ll also gain a movement speed buff while in berserk mode, gain some self-healing, remove all crowd control upon triggering the ability, and your attacks will become uninterruptible while in berserk.

The third ability under the Berserker tree is Raging Torrent. Activating this ability will perform 4 very quick attacks that each deal 90% of your weapon damage. As you progress this ability you will gain haste (increased movement speed by 20%) when hitting someone with a raging torrent strike, and if you can time a light attack at the end of the ability you’ll be able deal an additional attack that deals 120% weapon damage.

The Key passive for the Berserker tree is called Defy Death. When you take Defy Death you’ll be able to avoid death once every 75 seconds. Upon receiving damage that would have killed you, you will instead be reduced to 50 HP and gain immortality for 3 seconds.

The passives in the Berserker tree are heavily focused towards enhancing your damage output, and reducing cooldowns and removing negative status effects on yourself when your health is below 30%.

The throwing tree is focused around mid-ranged hatchet throws that deal damage and apply debuffs to your target. This tree is highly focused on maintaining the debuffs in order to obtain additional benefits when using your abilities on a target with an existing debuff.

The three active abilities on this tree are Rending Throw, Social Distancing, and Infected Throw. The key passive in this tree is called Persistent Hindrance.

Rending Throw deals a small amount of increased weapon damage to your target if hit, as well as, applies rend to your target for 10 seconds. Rend reduces your target’s damage absorption by 10%. As you upgrade this ability, the Rend is made more potent if you hit a target more than 6 meters away, it deals more damage if your target already has an active debuff, as well as reduces the abilities cooldown.

Social Distancing is an ability that allows you to throw an axe and dodge backwards creating a distance between yourself and your opponent. While dodging you will have a brief invulnerability frame. If you land the throw it also slows your target. The first upgrade to the ability increases your movement speed for 3 seconds if you land the throw and the target already has an existing debuff. The final upgrade applies a brief root if the target is more than 6 meters away.

The third ability in the Throwing tree is called Infected Throw. If you land this throw you’ll do increased weapon damage, as well as, apply both disease and weaken to your target. Disease reduces a target’s healing efficiency by 30% and weaken reduces the target’s damage by 10%. As you upgrade this ability you’ll increase the duration of both disease and weaken on target’s below 50% health, and the final upgrade creates a 3 meter disease AOE on impact that lasts for 3 seconds.

The key passive, Persistent Hinderance, extends all hatchet debuff durations by 20% on successful throwing axe hits. All of you attacks will also do 3% increased damage per debuff on your target up to a maximum stack of 4.

The recommended roles for hatchet are DPS and PvP.

The hatchet dishes out quite a lot of single target damage, making this a great option for a DPS weapon. It deals increased damage with berserk, and has quite a lot of utility on the throwing side of the tree. You can reference our “Damage Type vs Mob Type” guide for more information about which monster types are more susceptible to slash damage.

The hatchet is a good choice for a fast pace close quarters PvP playstyle. It excels at applying single target pressure to your opponent with light attacks, and provides you with good self sustain with berserk. The berserk ability also allows you to break out of crowd control effects upon activation making it a very powerful PvP ability.

For specific DPS and PvP builds you check out the hatchet builds in our builds section.

The Hatchet scales primarily off of strength and secondarily off of dexterity so pairing the hatchet with other weapons that scale from the same attributes is recommended. The recommended pairings for the hatchet in New World are the following:

The great axe scales solely from strength making this a great pairing the hatchet. The hatchet lacks crowd control and large a large quick gap closer. The Great Axe provides both of these options. Pushing into 300 strength with this weapon pairing is very strong as well because this will then allow you to gain grit on all of your light and heavy attacks which is where the hatchet shines the most.

The hatchet lacks crowd control, and the War Hammer provides a ton of it. This is a great pairing as War Hammer scales solely from strength making this a good option to push to that 300 strength mark to gain grit on your attacks. You lay down some nice crowd control with the War Hammer, switch to your hatchet, and apply a lot of pressure and damage to your enemies.

The spear scales primarily with Dexterity and has Strength providing secondary scaling. This complements Hatchet’s primary Strength and secondary Dexterity scaling. The Spear deals quite a lot of damage and can apply rend as well as bleed damage. This makes this a great choice for a split attribute pairing between Dexterity and Strength. With this combination you will be able to deal quite a lot of damage in a short amount of time.

The sword and shield scales primarily off of strength and secondarily off of dexterity making this an excellent pairing attribute wise with the hatchet. When pairing these two together you can also have a very powerful combination.

The bow scales off of Dexterity, making this a great ranged choice to pair with the hatchet. With this combination you can kite enemies well while shooting them with the bow, and if they get in range you have will have your hatchet to punish them.

How to Level the Hatchet in New World

In order to effectively level the hatchet It’s recommended that you start by putting a point into the Berserk ability. This will increase your damage by a significant amount to groups of enemies. You’ll then want to take Feral Rush and then put a point into Raging Torrent to round out all of your abilities. This will help you clear them much faster because you can pop your berserk into raging torrent and then land a Feral Rush for big finishing damage. Both Raging Torrent and Feral Rush can hit multiple enemies so they are great for burning down groups of mobs while leveling your Hatchet.

Next, you’ll want to begin upgrading your active abilities and placing points into the passives. The recommended path for your abilities while leveling is as follows:

The overall strategy is to train a group of mobs, get them lumped together and utilize your Berserk, Raging Torrent, and Feral Rush to deal tons of damage. You can then finish off the remaining enemies with your quick light attacks. To see specific weapon leveling locations in New World you can check our Weapon Leveling Locations guide.

Every Weapon Ability in New World has a corresponding Perk that can be found on armor and weapons. Most of the perks scale in power with the Gear Score of the item they are on. It’s important to note that you can only benefit from one instance of a weapon ability perk at a time. You can obtain the weapon perks randomly from drops or you can craft gear with the specific perk on it. You can enhance your chance at obtaining a specific perk by utilizing timeless shards.

You can reference our builds section for specific hatchet pairings and builds.

The ability perks for the hatchet in New World are as follows:

The type of gem you  will want to slot into your hatchet is heavily dependent upon your build and what you’re trying to accomplish. It’s also going to vary based on PvP vs PvE activities (You can check our quick reference guide for gems for a full list of gems and their effects).

Enemy types the Hatchet is strong/weak against

The hatchet deals slash damage. Therefore, the hatchet’s attacks are strong against the Angry Earth enemy types. This makes the hatchet an ideal weapon to utilize in an expedition such as the Garden of Genesis. You can check our Damage Type vs Mob Type Quick reference guide for a full list of damage type vs enemy type strengths and weaknesses.

That Concludes our New World Hatchet Guide. For more on where to level your Hatchet, check out our Weapon Leveling Locations.