Add our Discord bot to your server to get notified when we find new dev posts!

Weapon buffs do not apply

Can you check to see if your internal clock is synched? We’re looking into this, but I believe that should correct it in the meantime, especially since it’s working on another computer!

Visited the PUZZLE HOUSE of OROFENA, was pleasantly surprised by the thought that went into it. Your house is a work of modern art. Well done @Ravenharte !

Definitely something I’ve shared with the team! It’s such a well thought out idea.

Correct! We’re working to get that fixed, still!

I appreciate that feedback and we’ll definitely discuss it! I definitely understand - and have seen - how it can be confusing!

Did you have the items necessary for the recipe in your inventory/storage of settlement you’re in both times? It’ll only show up if you do.

Let us know if this wasn’t resolved with last night’s patch!

Turkulon can be taken out pretty quick, that’s true. That’s part of the reason why we are running it for more than a week (an extended period of time compared to last year). There will be many opportunities to take Turkulon out and get the rewards, so no need to rush.

In the meantime grab those regular turkeys too for the skinning knife reward, and enjoy all the extra meat!

Thank you for your patience and understanding.

As Return to Aeternum draws to an end, we’re opening up the following worlds to the public 2022-11-18T17:30:00Z. It may take several minutes and require a refresh for these changes to be reflected in the world selection screen.

Moving forward, they will be treated the same as Fresh Start Worlds.

You can find the release notes for the update here.

Thank you for your patience and see you in Aeternum!

Please note that this list is not all encompassing and is intended as an early look into a number of changes included within the most recent PTR build. This change list will be regularly updated, up through retail release of the game version.


ETA on Fresh Start Server Transfers to other Fresh Servers?

Should the decision be made to allow transfers to other fresh start worlds, we will announce it. We currently do not have an ETA.

We’ve added the article above, but you can also check it out here: 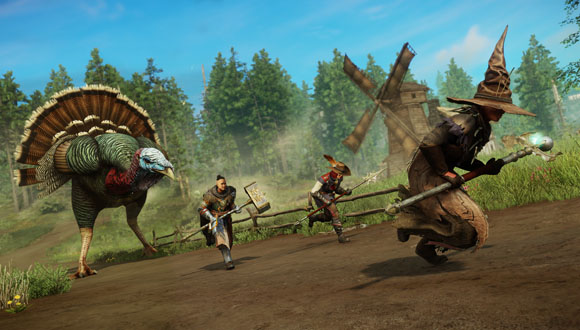 Get the last gobble for unique rewards before this event ends on December 6.

As noted in the article, getting credit does require a certain threshold of damage. I highly suggest grouping up, as it counts the entire groups’ contribution!

Should be resolved now! Thanks for reporting.

Oh no, fixing Susanna scared the Captain away.

I’ve fixed all the worlds indicated here. Feel free to @ me if any other worlds have this issue and I’ll get in as quickly as possible.


Jewel of Sea, no captain spawn

Have you checked inside the cave?