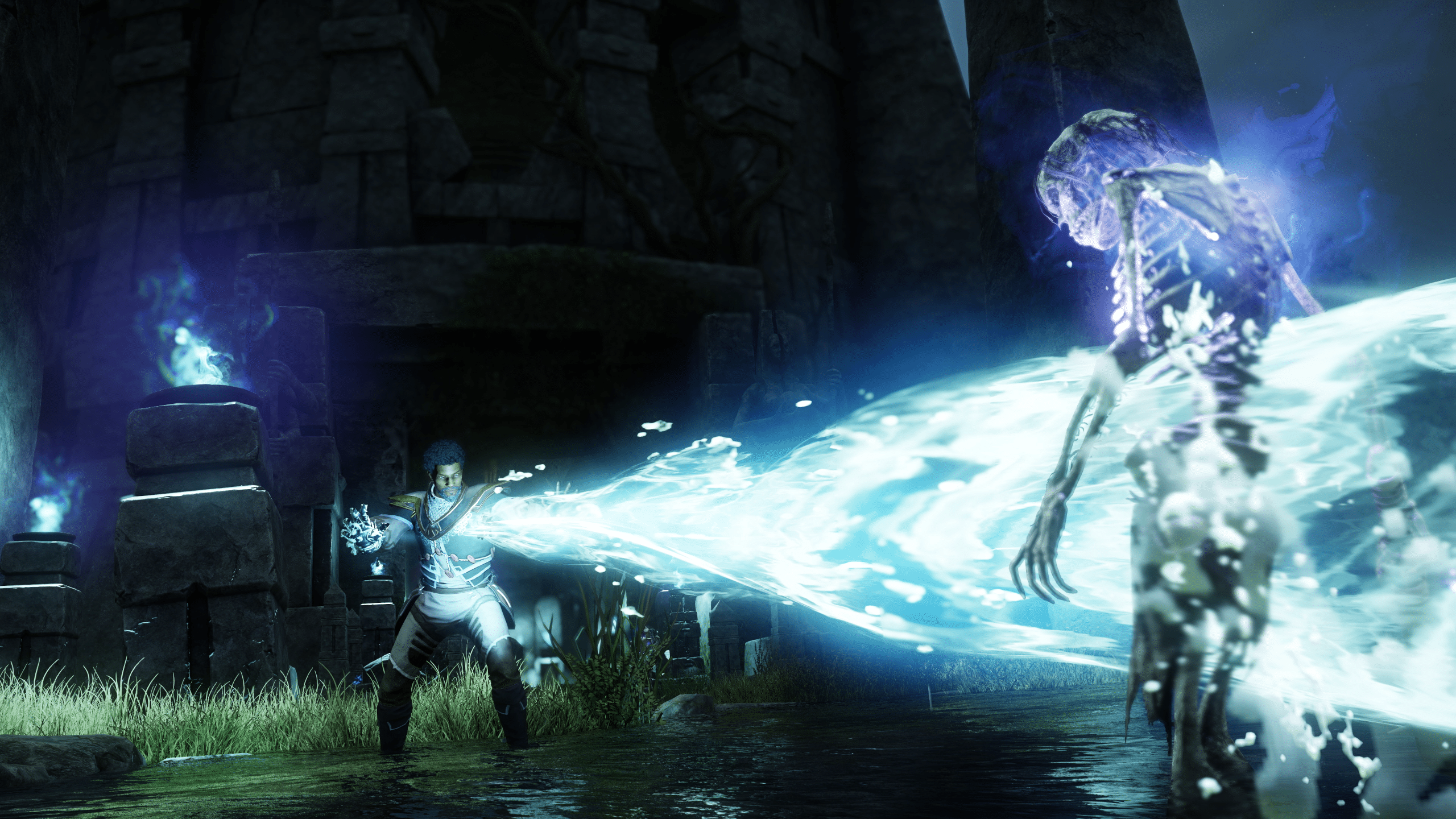 There are many unique drops to obtain in the Dynasty Shipyard Expedition. The following are the named drops in the expedition.

This Expedition is located South-East of the Everfall Settlement underneath the Shattered Obelisk. The recommended level to run Starstone is level 35. However, you can accept the repeatable quest and run the expedition at level 33.

Types of Enemies in Starstone Barrows and Optimal Damage Types

Once inside you will encounter the Ancient enemy type. The most effective damage types against the Ancients are strike, void, and lightning damage. Therefore, in order to maximize DPS a lightning or void gem should be slotted into your weapon, with lightning being the superior damage type, and a weapon that deals strike damage should be utilized. You can check our Damage Type vs Mob Type quick chart for a full list of strengths and weaknesses for all enemy types.

You can also use Ancient Coatings and Ancient Ward Potions to dish out more damage and to mitigate additional damage from the Ancient enemies. Additional options to help you maximize damage output would be utilizing an Ancient Combat Trophy and utilizing a weapon that includes the Ancient Bane Perk. You can also utilize armor that includes the Ancient Ward perk. Utilizing the Coatings, Ward Potions, Trophies, and Perks are not vital to completing the dungeon, but are options to help you min / max your DPS and resistances while in the Starstone Barrows Expedition.

How to Enter the Starstone Barrows

In order to enter the Starstone Barrows (like all New World Expeditions), someone in your party will need to be at the entrance to enter.

There is a limit on the number of expeditions you can run.

You can browse listings created by other players, or post your own request to join other players on your server. This tool allows you to declare your preferred team role, such as DPS, tank, or healer. You can recruit based on those roles. You can also set recruiting requirements like minimum gear score and level, then inspect members to learn their average gear score, weapons, and mastery levels.

At level 33 you can obtain the quest More Bones for Barkimedes. This is a repeatable quest that can be picked up from Barkimedes who sits in front of the Amrine Excavation Expedition. During the Starstone Barrows Expedition you will encounter 3 skeleton mini bosses that will each drop a bone. You need to pick up all  bones in order to complete the quest. You will then have to return to Barkimedes to turn the quest in.  Along with the More Bones for Barkimedes repeatable quest you will also begin to receive Expedition Faction missions for Starstone Barrows from Everfall once you reach level 33.

Once inside, head west down the ancient hall and cross the bridge to clear the first group of Ancients.  Once cleared, open the Ancient Azoth Seal and head into the Sealed Chamber

From here head up the stairs and clear another group of ancients above.  Here you will be introduced to the first mechanic of the expedition, the Arcane Beams.  To the right (north) there is a room with an Iron Vein and a lore page.  To the left, you will need to crawl prone under the beams to move out of the Sealed Chamber and to your first Checkpoint.  Keep heading down the hallway. Dodge the next beam and clear the next group of ancient mobs.  From there, head south to enter the beam-filled Forbidden Passage.

Here is where the fun begins!  Keep heading south and drop off the ledge to left.  Then continue south and avoid the beams!  You will keep going till you see the ledge of the platform.  From here you will hug the ledge to the right and jump across the first gap using your action key (default shift).  Once on the next platform climb up the wall to the right and take a left turn.  You should see a bouncing beam ahead.

Careful as there is a Shattered Archer on the other side of the beam that has a knockback ability that can knock you into the beam!

Kill him, then head up the wooden platform ahead onto the wooden walkway.  Jump off the walkway and onto the stone platform below then SPRINT straight and jump over to the lower wood platform.  Clear the adds below and then hug the wall around the corner to your right.

After turning left you will be able to reach the Arcane pool below.  This will provide one player in your group with an Arcane Protection enchantment.  Once picked up a shortcut will form between the platform and the beginning of the room.  Whoever picked up the Arcane Protection can now stand between the arcane beams and open up a gap for members to go through.  This mechanic will be several times throughout the Expedition.  Use the Arcan Protection to move through the 3-beamed doorway to the south.  This leads to the 2nd Respawn Shrine.  There is also a chest in the hallway ahead.  Turn to the west and up the stairs to clear some more Ancient Mobs.  Finally, get past the Arcane beam at the end of the hallway and enter The Amphitheater.

Once inside the Amphitheater, turn left to see a grand staircase with several Ancients.  In this pack of Mobs is an Elite mini-boss named Ioane.  Ioane is wielding scimitar sword and has an exceptionally high amount of mobility.  Kill Ioane and the mobs then move up the stairs and around the corner to the right (north).

You will see another pack of ancient mobs with another Elite mini-boss named Erine.  Erine has an Ancient with a spear and a shield.  Down these mobs, open the Ancient Azoth seal, and head into the Shattered Obelisk.

Just inside the door are the 3rd Respawn point and a flight of steps.  Climb the Steps and Grab the Expedition chest to your left.  Clear the mobs and the arcane beam at the top of the stair will turn off.   head up the stairs and go to the left of the Obelisk and down the stair behind it.  Clear the Ancients below and head through the Ancient Azoth Sealed door to the Antechamber

Inside the door, you’ll see a respawn shrine.  Head to the right and clear the Ancient mobs up ahead.  You’ll note a door with 4 runes on it.  You’ll need to remember this for later.  Now turn around and go through the Ancient sealed door behind you and head to the left.  More Ancient mobs Ahead!  Clear them and head down the stairs to the Halls of the Crypt

Halls of the Crypt

Keep heading down the hallway and clear the next group of Ancients and head down the stair to your right(east).  Below you’ll find two Elite mini-bosses, Limos and Erebas.  Defeat them and make sure one party (preferably DPS)  member picks up the Arcane Protection buff at the back of the room!  You will need this buff to get through Use this to get through to doorways protected by arcane beams.  Go through the three beams, then the 4 party members without the arcane Protection need to clear the ancients quickly so that the protection buff does not expire before the party gets through the next set of beams.  Once through the second set, you will be greeted with a Respawn Shrine. Head up the stairs, back to the Shattered Obelisk for the first boss fight.

Once up the stairs, you will encounter a pack of Ancient mobs and the first true boss of the Expedition, Alectos the Relentless.

Through the duration of the fight, the tank will face Alectos towards the outer edge of the platform to point Arcane Orbs away from the group. The Tank will also need to interrupt Arcane Rejuvenation interrupting his self-heal, Arcane Rejuvenation.  The DPS may need to help interrupt this ability if the tank’s interrupt is on cool down.  The DPS will need to clear the adds that Alectos spawns, preventing Alectos from enchanting them.  The rest of Alectos damage is easily avoided at range.  Finish him off and collect your loot.

Once Alectos is down, note the Ancient Shrine(shrine with blue pool).  You will need to use this later.  Grab the chest to the west, then head down the steps and clear the Ancients Below.  Grab Arcane protection and head through the two sets of Arcane beams. There will be another Elite mini-boss named Sangarion with more Ancient mobs.  Once clear, search the ornate chest for the Obelisk Key.  You will need to take the Obelisk Key back to the Ancient shrine to bless it.  Then take the Key to the Antechamber to open the Runed door.  Head back through the Halls of the Crypt to get there.

Use the Obelisk Key to open the Runed door and enter the Crypt of the Regent.  Once through the door, you will see the final respawn point.  The final boss is ahead.

His first phase is simple.  DPS Greundgul and clear Gruendgul’s Bones as he spawns them in.  You will always clear the bone first, then the adds they spawn in.  Once you Kill Greundgul, his second phase begins.

Gruendgul will now start leaping around the room, creating a shockwave from where he lands, creating a massive AOE shockwave.  Dodging these completely is difficult, so players will need to spread out and avoid the once they can to reduce stress on the healer.  After several leaps he will then stop leaping and spawn in 2 Bones.  Kill the bones first and then the adds.  Gruendgul will then go back to the Leaping phase.  Rinse and repeat and you have finished The Starstone Barrows!