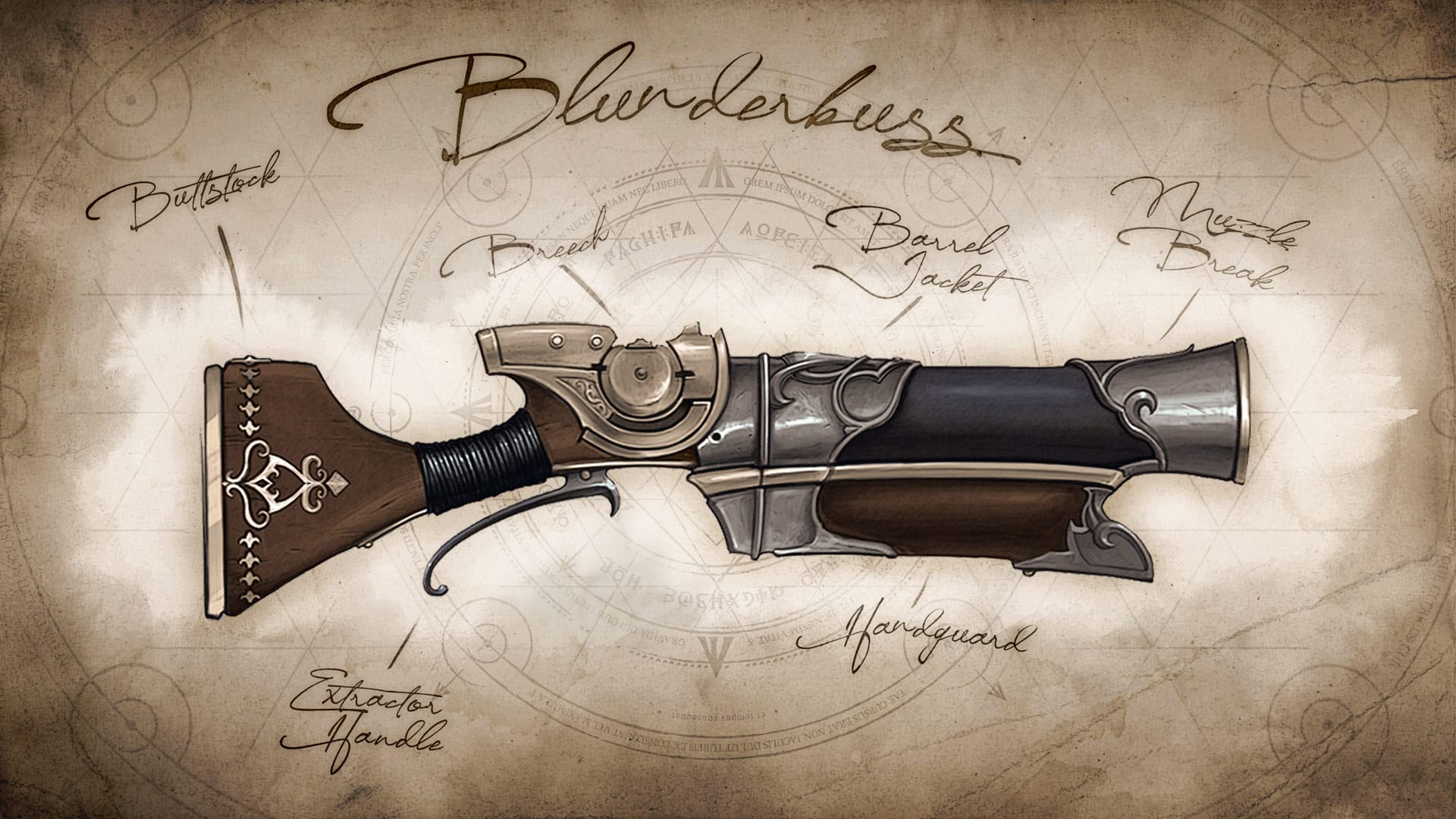 This New World Blunderbuss Sword and Shield Build is for Arenas and Outpost Rush. This build revolves heavily around your abilities being active but has the potential to one-shot your opponent. This can be useful for taking out high damage opponents and healers very quickly in arenas and Outpost Rush, giving your team the upper hand.

For this build, the sword and shield will primarily be used to stun your opponent to set up the blunderbuss damage.

You will want to fully upgrade both leaping strike and shield rush. You will only upgrade shield bash once.

The passives you take will support additional damage, and more importantly, allow you to push into the leadership passive to provide a nice damage increase.

You are going to take the blunderbuss abilities that will allow you to essentially one-shot your opponent with a massive amount of burst damage.

First, fully upgrade Azoth Shrapnel Blast to greatly increase your damage with this ability. You will also fully upgrade claw shot. Upgrade blast shot once in order to gain the ability to apply rend to your target.

For the one-shot combo, you will want to be shooting for high damage. The blunderbuss is a split stat weapon between Strength and Intelligence so you will need both. You are going to shoot for:

If you are getting killed too easily you can push your Constitution up to 150 and drop your Intelligence to 100. Your one-shot combo will not be as effective, but you will still provide a good amount of burst damage and can still easily finish off the damaged targets.

In this Section of the One-Shot Blunderbuss – New World Blunderbuss Build, we will break down what equipment you will use. This includes armor perks, weapon perks, and equip weight.

Most of the armor you need to run the Blunderbuss build will be obtained through crafting or random drops. Below are the recommended perks for your setup:

You could farm the Wizened pieces from the Tempest Heart Expedition if you can’t craft some of the gear. These pieces have the Intelligence Attribute, and have both Shirking Fortification and Refreshing on them, except for the hat and boots. They have a third perk as Elemental Aversion which is not terrible, but not ideal for this build. These pieces coupled with 2 other pieces could round out the build until you could obtain best in slot pieces.

Ideally you will want to have Empowering Leaping Strike on your sword or have the sword of the champion. Along with the weapon perk you would also want to shoot for Rogue and Refreshing Move.

If you can not obtain the above then you would want to have empowering leaping strikes on your armor in place of a refreshing move perk.

You will be utilizing a round shield in this sword shield and hatchet build. The perks you will be shooing for on the shield are fortifying shield rush, refreshing / refreshing evasion, enchanted, keenly jagged.

If you can not craft the shield you can obtain several random round shield drops from running expeditions. They often drop with good perks. The perk pool for round shields is not huge so it’s fairly easy to obtain a good one.

For your Blunderbuss you would ideally want to shoot for one of the Attunement Perks (Flame Attunement, Frost Attunement, etc), Enchanted, and Vorpal.

However, crafting an item with those specific perks can be difficult. There are a few drops that would work as well.

Slayer – Obtained from the Leviathan of the Deep in the Shattered Mountain Mines. This weapon does have Venturing Claw Shot on it, so if using this weapon you could replace venturing claw shot on your armor with Shirking Fortification.

SpreadShot – Obtained from the Disciple of Disorder in Myrkguard. This weapon has Leeching Shrapnel Blast on it, so if using this weapon you could replace that perk on your armor with Shirking Fortification.

You will want to slot an Opal in this weapon. During the combo, you will be rolling forward. Having the opal in your weapon will increase your damage after the roll.

Ring – For your ring, you would ideally want Mortal Empowerment, Refreshing, and Hearty.

However, if you can’t get your hands on one then you can farm out Smooth Bone Ring from the Caretaker in Garden of Genesis.

Earring – For your earring, you can farm out the Doom’s Chance from the Caretaker in Garden of Genesis

The types of gems you will depend upon the PVP meta. If in doubt, Onyx is a solid choice.

For your weapons you will want to slot an opal in both. You will be dodging quite a lot so the opal will enhance your damage output.

For you runeglass gems you would want to utilize the sighted variant to deal additional damage with your blunderbuss attacks.

The heartgem rune of choice for this build is the Cunning Heartrune of Detonate. You can activate the heartrune and gain empowerment. This will allow you to start your combo with a lot of increased damage and then gain additional burst on the explosion of the detonate rune.

You’ll want to utilize the following consumables for this build:

Along with one of the following depending on your attribute distribution from your gear. You can check a full list of consumables by checking out our consumables guide.

How to Use Build

The New World Blunderbuss Sword and Shield one-shot build revolves heavily around having your abilities up.

After performing the combo your target should be dead or will have taken a significant amount of damage. Your role after that will be to stay alive until you’re able to perform your bust combo again.

During the downtime between combos, you can deal some damage with your sword auto and blunderbuss light attacks (or auto attacks) to set up the next combo.

That concludes our New World Blunderbuss One Shot Build, Remember to be patient, pick you targets wisely, use your cooldowns effectively, and you’ll be one-shotting people in no time!